I’m so tired these days. It’s hard to wake up. I think I’m missing the sun. Maybe my body wants to hibernate. This sleep-walking state seems to be good for my writing though. Probably because my brain is left out of it and my subconscious has full reign of my fingers as I type.

The following is the beginning of an idea that I have carried in my heart for years. I was always afraid to work on it. This morning I woke with a song in my mind, the song that is the inspiration to that idea. And these words flowed out. If you have any comments or feedback… you know the drill.

I’m writing this to you. You know who you are. You are the one who destroyed my life.

I remember when I saw you the first time. You were standing at the edge of the crowd on the afternoon of the poetry reading in honor of the prize we’d recently won at the department. I noticed you because you were so still, standing like a statue – or no, not a statue. A statue is dead. And you were alive. The whole chattering, laughing, excited crowd seemed dead next to you as you stood there. You were the center of the world spinning around you. And your eyes… Your eyes were fixed on Norma.

I pointed you out to her. How ironic is that?

I wonder now… If I hadn’t pointed you out, if I hadn’t bent my head to her as we sat at the side of the stage, and whispered “Hey, I think you’ve got an admirer!” and she hadn’t smiled up at me and said “Only one?” and then followed my little nod in your direction and she hadn’t met your eyes over the crowd assembled to hear the poetry of our students… Had none of that happened, would I be writing this letter now? Would she be here with me at this moment, instead of…

But I cannot blame you.

The blame rests with me. Or maybe not. Maybe there is noone to blame. Maybe it had to happen like this. Maybe this was always meant to be, right from the beginning.

The beginning… I don’t even know when it began. I seems there is no beginning. Was it that our grandfathers worked side by side in the factory? That they went off to fight in the same regiment and returned home badly wounded within three months of each other? That their wives had forged a close friendship in their absence and the couples bought neighboring houses? That our fathers and uncles and aunts grew up side by side? That our fathers, in turn, moved into neighboring houses when they each married? Was that the beginning?

Or was it that we were born in the same year, six months apart – the winter child and the summer child. Mike and Norma.

a grand day out

As befitting a year devoted to courage, I continued the process of unfurling from my self-induced state of reclusion and had a grand day out on Saturday. My youngest sister had to go the airport in the morning to fly back to England and since for unfathomable reasons it’s cheaper and quicker to go by car than by public transport, that’s what we did. I dropped her off and then navigated the car downtown, the town in question being Stuttgart (the capital of Baden-Württemberg, which is a federal state of Germany, the one right down in the south-western corner).

We’d started out from home with blue skies and a rose-and-gold sunrise, but we’d encountered the first snow on the way down already. When I’d parked the car and walked the couple minutes to the centre, I sent my middle sister this picture and text:

I’d forgotten the acute sense of being connected and at the same time gloriously alone that you get when drifting through a big city, but I recaptured it as I tried my way through some new clothes (everything sorely needed, some of it coveted, practically nothing that fit), navigated some shoe stores (same story), ate my way through a variety of international take-away food, listened to street musicians, smiled at the pigeons huddling everywhere to be away from the snow, and looked out for the small human interactions, the gestures, the words, the movements that make a city come alive.

the new palace – a cool place to hang out in summer, when people sit everywhere on the grass and the park benches, but very much less so in this weather

At one point it got really cold and I bought myself a cheap pair of finger-free gloves, choosing, from the rainbow of available colours, the electric-blue ones, which went together awesomely with my choice of nail polish for the weekend, hot pink. The rest of the day, I felt like shoving my hands in front of every stranger’s face and say: “Look! Pretty, isn’t it?” I didn’t. I didn’t take the gloves off again though, not even when I was sitting in a café. I enjoyed too much the feeling of being colourful again. And since you guys are my friends and won’t call the police on me for harassment, I’m gonna shove my hand in front of your faces. Look! Pretty, isn’t it?

exactly the right colour combination for a grey winter day

I’d toyed with the idea of spending part of the afternoon in one of my favourite museums (an ethnological museum that has the most interesting special exhibitions and is a mine of creative inspiration!), but they closed early, so I didn’t manage. Instead, I spent the time in the two major book shops, feeling calm and happy in a way it’s only possible to feel in the presence of large numbers of books. These are the ones I eventually chose to take home with me:

They are all in the area of contemporary fantasy, which wasn’t planned as such. I pondered the poetry and the crime section just as long and the classics even longer. I was very tempted by a new edition of On the Road, with beautiful photography and set in a clear, stark font, but eventually decided to go for new stories. Now I wonder if there’s a deeper meaning behind my choices. Maybe I long to escape into a magical world as well. (Well, I know I do, I just didn’t know it was this easily translatable into book choices).

I’d also thought about going to the theatre or the opera in the evening, but there was nothing on that particularly interested me and after a whole day of walking and strolling and standing I was pretty tired anyway. Tired, but happy.

Happy because I bought four books whose covers I adore and that I can’t wait to read. Happy because I let myself drift, which is freedom and pleasure in itself. Happy because I smiled at people in cafés and behind counters and people making music and most of them smiled back at me. And happy because I haven’t lost the knack of noticing small, easily-overlooked details in the rushing crowds that make me laugh and think.

Life’s pretty good, all in all.

the sign on the wall (of the old palace)

How was your weekend?

November went by fast and slow at the same time and even though I started out all motivated and geared up for NaNo, I didn’t get very far and have “lost”. I’m not going to tell you any lame excuses, I could have done it easily, if only I’d done it. So… Where does this leave us?

Right in the middle of December, I’d say. Alright, not the middle, but you know what I mean. Actually, December has been much more varied and fun than November so far and although I usually don’t get into any Christmassy spirit until (roughly) December 23rd, I’m well ahead this time. These are some of the things that have happened in December so far: 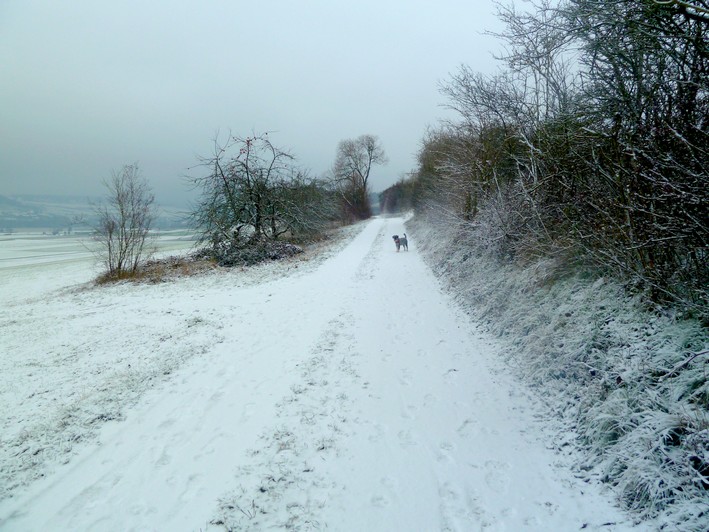 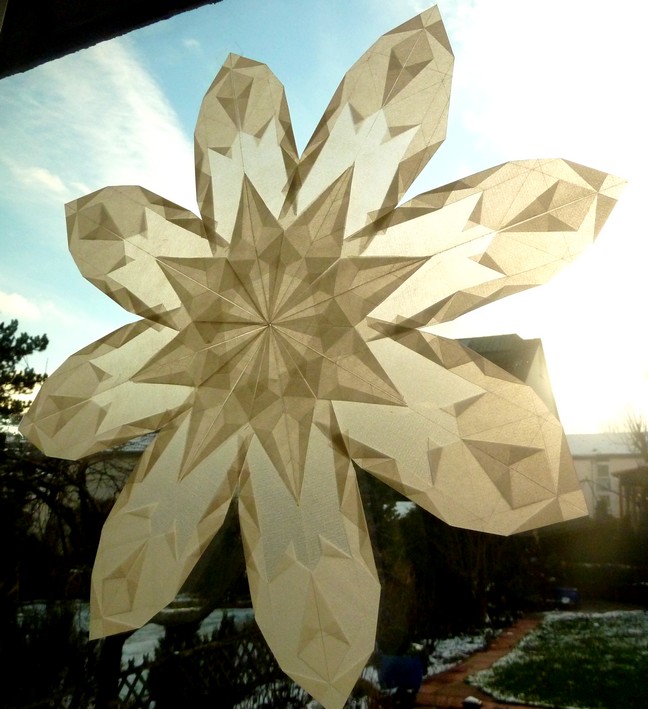 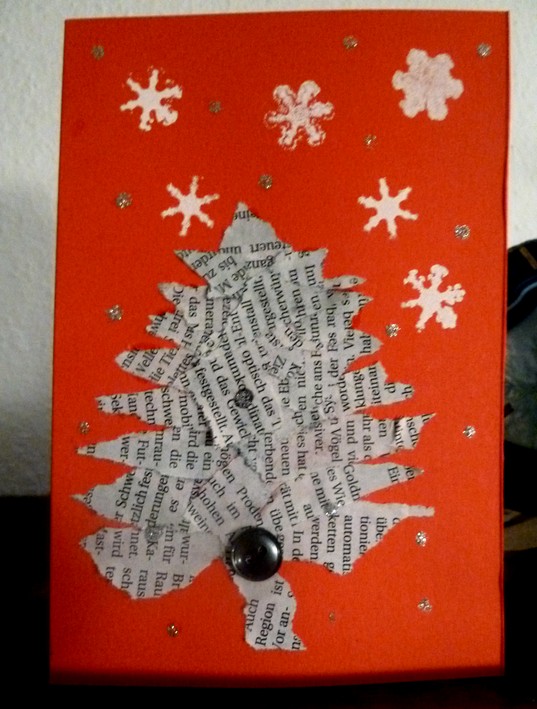 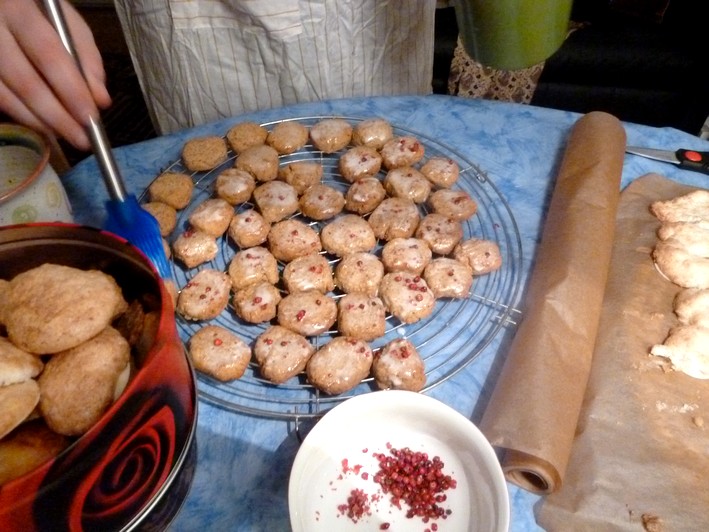 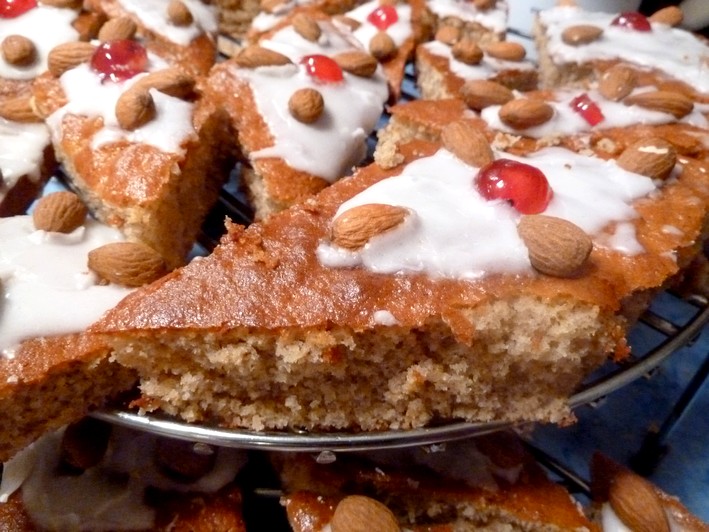 So, how has November left you? And what’s your December like so far?

And incidentally – which one of the two “snowflake” pictures do you like better? Or don’t you like them at all? I can’t make up my mind – feedback is greatly appreciated!

It’s late morning. The sun is shining with a bright, white, winter light in between the high, grey-blue clouds. The trees in the garden are practically bare, only a few last red leaves cling to the branches.

The dog is napping, stretched out in the sunlight. It’s very quiet. Tracy Chapman is providing the perfect soundtrack.